It was Friday evening: I was making myself comfortable in front of the television, about to watch a documentary, when I was suddenly interrupted by a strange noise. It was a familiar rustling; a sound I knew from my childhood. I went to the window and saw a man walking along the street. To attract attention, he was using the 깔깔이 (kkal kkari), a special wooden instrument. Now, I remembered the winter evenings when vendors marched through the streets selling Chapsaltteok and Manggaetteok.

Was it coincidence or fate that the following day at the Jagalchi fish market in Busan I discovered an elderly gentleman selling Manggaetteok, among other things? Reason enough to talk to Jang In-deuk 장인득 (80).

Mr. Jang, you have a somewhat unusual portable stall. What exactly do you sell here?

I sell Manggaetteok 망개떡 and Dango 경단. These two snacks are old, traditional Korean rice cakes. Manggaetteok is made up of the words Manggae 망개 (manggae leaves) and the word tteok 떡 (sticky rice cake). Manggae trees are very rare and can be found mainly in Korea, Japan, and China. Dango is actually a Japanese word and is called Gyeongdan in Korea. Dango dates back to a time when Koreans were influenced by the Japanese colonial period. Therefore, Dango is a familiar term to many older Koreans.

Many people believe that Tteok comes from Japan. Is that so?

Tteok definitely comes from Korea and was eaten as early as 1800 years ago during the Samhan (삼한 “Three Han”) period which had the three Han “confederations,” Mahan (마한), Jinhan (Chinhan) (친한), and Byeonhan (Pyŏnhan) (변한). Tteok is often confused with the Japanese rice cake Kashiwa Mochi. Unlike Manggaetteok, Kashiwa mochi is wrapped with oak leaves.

Why do people love the Manggaetteok so much?

I’m sure it has a lot to do with childhood memories. I used to sell the Manggaetteok near the school during the day. In the evening, I walked through the alleys of Busan. People recognized me, got hungry, and bought Manggaetteok (laughs).

Why is Manggaetteok so popular, especially in winter?

In the past, there was not much to eat in winter and the winter nights were often very cold. That’s why people didn’t go out in the evenings. So, it was a blessing for many to hear the sound of the 깔깔이 and the voice of the Manggaetteok vendor.

Do you make the Manggaetteok yourself?

My wife and I start making the Manggaetteok every morning at six o’clock. This is based on a very old secret recipe. We only use natural ingredients. Instead of sugar, we use 엿질금 malt as a sweetener. The Manggae leaves are not used as decoration but as a natural preservative. When we have made two boxes of Manggaetteok, I go to the Jaggalchi fish market around 12pm, where I sell them all by evening.

When selling, you always lug your special container from one place to another. Isn’t that very time-consuming and exhausting?

You don’t sell the real Manggaetteok “off the board.” You have to carry the rice cake container from one place to another. This is the only way people recognize us as genuine Manggaetteok sellers. But it is very physically demanding work. When I come home in the evening, I always have knee pain. And since I am already of a certain age, I have to take care of myself accordingly or get an injection for the pain from time to time at the hospital. But I am stubborn. I want to continue my work as long as possible because it is important to me that this tradition lives on.

Do you want to continue making and selling Manggaetteok for a long time?

I am 80 years old now. My grandfather and father still made and sold Manggaetteok at this age. When I was young, I wanted to become a businessman but failed with my plans. So when I was 30, I learned this traditional craft and took over the business. Our family business is now celebrating its 100th year.

I am happy and proud to still be able to maintain this old tradition.

Is it possible to make a living from it?

I don’t want to complain. Since Corona, however, sales have dropped significantly, but it’s still enough for two elderly people like me and my wife (laughs).

Food culture is also changing in Korea. Will Manggaetteok still exist in the future?

I am happy and proud that I can still keep this old tradition alive. I will teach my craft to my nephew so that he can continue our business. So, at least in Busan at the Jagalchi fish market, Manggaetteok made in the traditional way will still be sold in the coming years.

My thanks to Jang In-deuk. I enjoyed learning more about Manggaetteok. There are always products that disappear from the market or those that suddenly become trendy again. This was also the case with Manggaetteok as the fans of the famous K-pop group BTS gave one of the band members – Jimin – the nickname Manggaetteok. Allegedly because they think of Manggaetteok when they see his chubby cheeks… 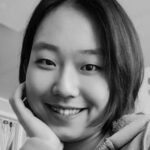 Yeim is a Korean native based in Dadaepo, Busan. She has many interests: immersing in different cultures, studying languages (English, Indonesian and more to come), exploring the world, hearing people's stories, writing, drawing and playing the piano. Above all, she wants to make the world a better place.